This year, PostgreSQL Conference Europe will be held at the Berlin Marriott Hotel. 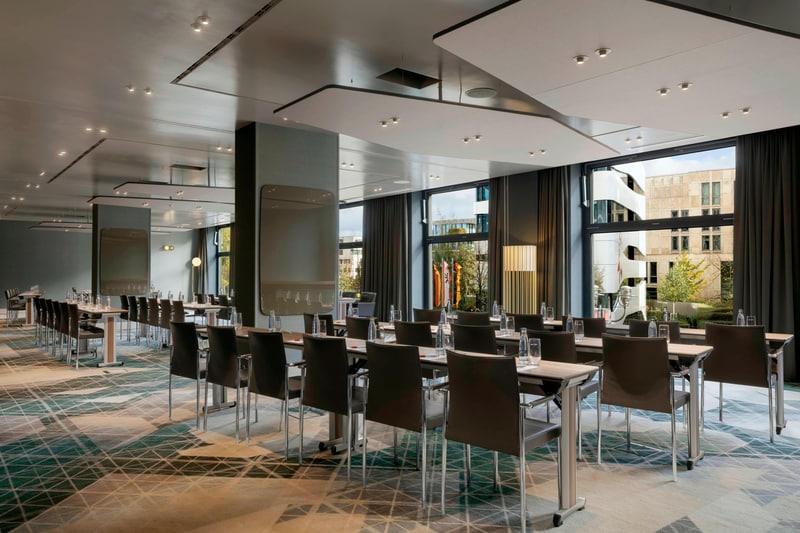 Visitors from out of town can also take advantage of staying at the hotel, to get the easiest possible access to the conference, our events, and seeing the city!

We have arranged for discounted room rates for our attendees, to make a reservation make sure you book via our booking link to get the best rate possible. The negotiated rate is €215 per night, including buffet breakfast and taxes. The rate is available for booking until September 21, 2020 unless it sells out earlier.

Most long-distance trains to Berlin either stop at Berlin Ostkreuz or at Berlin Main Train Station (Hauptbahnhof). From there follow the instructions below.

The Central Bus Station is located in Berlin Charlottenburg-Wilmersdorf, in the western part of the city. Berlin is well connected by bus with other larger cities in Germany and in Europe. Detailed information and time tables can be found on the ZOB Berlin website. Also check the website of your preferred bus company.

Right in front of the ZOB is a bus stop, and the bus line 139 stops there.

Berlin is well connected on the German motorway system.

All these motorways lead to the A10, which is the motorway ring around Berlin. From there, smaller motorways diverge into the city. The inner zone of Berlin city (actually the part inside of the "S-Bahn Ring", where the S41 and S42 circle Berlin) is an environmental protection area. A so called "Umweltplakette" ("green sticker") is required on any vehicle which wants to enter the zone. German cars should already have one of the green, yellow, red of black stickers. Drivers of foreign vehicles can obtain a sticker online. More details on the berlin.de website. Driving a car without having a green sticker can result in a fine of 80€.

The venue has a parking garage, the entrance is on "Ebertstraße 1-3, 10117 Berlin", next to the restaurant "Midtown Grill". Look for an overhead parking sign.

The closest parking garages nearby are:

The Havel-Oder-Waterstreet connects the Havel and the Spree in Berlin with the Oder along the German-Polish border. It's a navigable waterway, and eventually connects to the Baltic Sea. The Waterways and Shipping Office in Eberswalde has more information available.

The Elbe-Havel-Canal connects the Elbe with the Havel-Waterstreet. It is a navigable waterway, and includes two watergates. Eventually it connects to the Nordic Sea. The New Waterways Authority in Magdeburg has more information available.

Travel in Berlin to the venue

The venue is located at: Inge-Beisheim-Platz 1, Berlin 10785 Germany.

From the metro station walk one block north along the Ebertstraße, then turn left into the Hans-von-Bülow-Straße. The hotel is on the right side.

The bus stop on the Ebertstraße is "S Potsdamer Platz Bhf/Voßstr.", the lines M41, M48 and M85 stop here.

Depending on where in (or around) Berlin you start your journey, you need a ticket for the public transport. The venue itself is in the "A" region.

The following ticket is required when starting from:

More ticket information is available on the S-Bahn Berlin website. Ticket prices are explained on this website, and you most likely need a "2 hours to destination" or "all day long" ticket. You can also consider one of the "Berlin visitors" fares, if you plan to explore the city a bit more.

The price for a taxi to the venue from:

You can use the FREE NOW service to pre-order a taxi.

In Berlin many companies operate rental bikes or scooters. Please check your preferred vendor if it operates in the city.